It’s been a busy few weeks for residents in Penguin Bay, which marked its first anniversary this month. 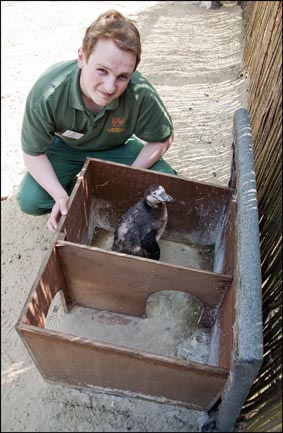 The £40,000 walkthrough exhibit has been one of the site’s most popular attractions since launching in May 2012, allowing visitors to get up close to one of Europe’s largest colonies of Humboldts.

And with more than 70 of the world’s rarest penguins in the bay, there is always something going on!

This week keepers discovered 18 eggs and eight newly hatched chicks tucked away in the nesting boxes.

Birds section leader, Kellie Piper, said: “We check the boxes once a week and keep an eye on them just in case we need to intervene and it was a lovely surprise to find the babies. They all seem to be strong and healthy and two in particular are very big already, which is a great sign.”

The chicks, who are born with a soft velvety layer, will remain in the nesting boxes for around three months while they develop their waterproof feathers, before taking their first few steps outside to meet visitors.

The poolside has also been recently boosted by the arrival of six month-old Bongo who has been returned to the colony after being hand reared by keepers.

The youngster  pictured with bird keeper Luke Millar  was rescued after his mother abandoned him as a newly hatched chick outside the nesting box during a torrential rainstorm.

“He’s settled in with the other birds and is interacting really well with them although he still comes over to say hello to us at every feed” added Kellie.

Elsewhere in the bay, younger penguins are busy house hunting.

Penguins pair  for life and lay eggs in the same boxes year-on-year, and with many of the hillside nesting boxes already occupied, the couples are starting to use the under path walkways and explore the adjacent beach in their search for the perfect abode to start their families.   Male and female Humboldts share egg-incubating duties for about 40 days. When the chick is born they share food-finding duties and will not leave the baby until is around two months old.