We’ve welcomed back bush dogs to the DZG collection following a five-year absence. 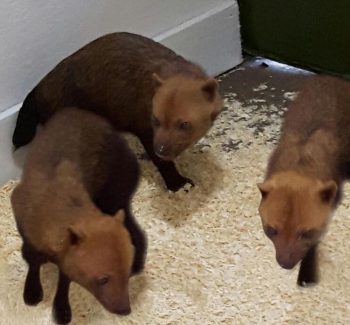 Three year-old sisters, Scarlet, Ruby and Rioja have joined us from Twycross Zoo.

“We’ve returned them to the enclosure where our last pack lived, which held Patagonian mara in the interim, so we hope they’ll show really well there as they seem very lively girls!

“They’ve only been here a few days, so are still settling in, but we’ve already identified Ruby as the dominant female, as she is more inquisitive and will take the lead over the others.

“Rioja is very noisy and Scarlet seems the quieter one, but we’re looking forward to getting to know their personalities.”

The Patagonian mara recently relocated to form a mixed exhibit with the black howler monkeys in the Triple Tecton enclosure.

A near threatened species, bush dogs are native to Central and South America, but are losing their habitat for farming.

Thought to look more like a badger or otter than a member of the dog family, bush dogs are adapted to a semi-aquatic life with webbed feet, short legs and short, bushy tail.

Did you know they’re also nicknamed vinegar dogs because they produce a strong scent that resembles the acidic liquid.