Ungulate keepers have been busy brushing up on their decorating skills by freshening up the tapir and giraffe enclosures with a new lick of paint.

The team have been putting in extra hours to get the work done, starting at 7.30am to repaint the internal walls in the sleeping den so that the paint dries during the day and is ready for the Brazilian tapir family to return in the evening. 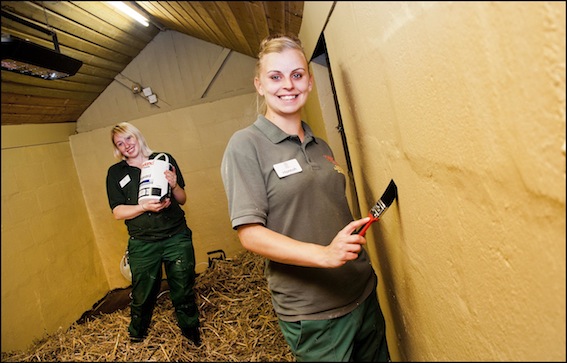 Senior Keeper, Laura Robbins – pictured above with Trainee Keeper, Hannah Follows – said: “We aim to paint the enclosure between seasons as the tapirs and their roommates, the capybaras, have a tendency to rub themselves up the wall and make the beige walls look very grubby.

“We have to get the work done relatively quickly as the tapirs have to be locked out for the day while it dries before they’re let back in to sleep.”

Staff are also staying behind after work to stain the giraffe house and paint the metal paddock boundary fencing before the winter weather sets in.

Laura added: “We can only do the work on the giraffe house façade and fencing when the giraffes are inside for the night, so we’ve had a few longs days recently with lots of painting involved, but it’s all part of a zoo keepers job.”