Like most females, Columbia the Brazilian rainbow boa wants to keep her skin looking radiant  and she does it by soaking in the bath most of the day. 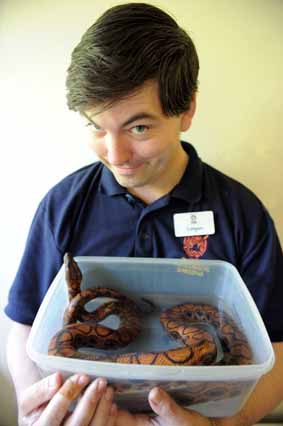 Columbia is very much in demand for Creature Features  informative educational talks with live animal demonstrations  and she likes to appear with her iridescent rainbow scales gleaming to full effect.

The boa’s rainbow colours are caused by the refraction of light as its scales act like mini-prisms, due to microscopic ridges that go unseen by the naked eye.

Soaking in her vivarium for hours leaves Columbia sparkling.

Presenter Langan Turner said: “Columbia is a tree snake really, but she adores water and spends a lot of time in the bath, as she loves the humidity and it is good for her skin.

“When we get her out of her vivarium we have to take a towel to dry her before she meets the public, as inevitably she has been having a long soak and is dripping wet.”

He added: “Columbia has a nice steady temperament, so we use her for educational events, such as school based talks and Creature Features in the community.”

Previous: Pumpkin treats aplenty
Next: Lunch on its way