Dudley Zoo’s giant African land snail Brian, a pair of stick insects and four cockroaches have all been blessed after representing the zoo at an animal service at Derby Cathedral. 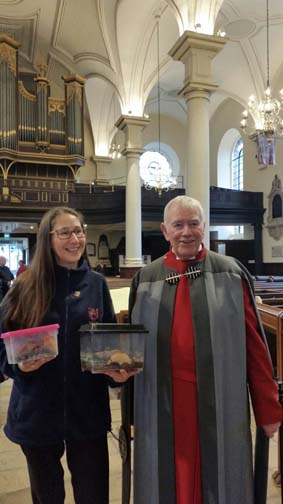 Senior Keeper Lesley Lewis, pictured left with Head Verger Geoff Alvis, took the creatures to the St Francistide Animal Service at The Cathedral Church of All Saints in Derby on Sunday, October 18, on behalf of DZG.

The zoo was invited to take along a selection of animals to the worship – similar to the pet service in the hit BBC comedy The Vicar of Dibley – which has been running for the last 11 years.

She said: “It was such a lovely service, a little bizarre, but lovely all the same.

“Our animals were made very welcome and sat on the front row. They all got a blessing as well and it was wonderful to be part of it.”

Dr Alex Rock, Development Officer for Derby Cathedral, used to work as a marketing assistant at DZG and was delighted when we accepted his kind invitation to go along.

He said: “It all went off very well, even though we had dogs wailing at the same time the choir were singing. It was lovely to have some animals from Dudley with us too and they were all very well behaved. There was lots of interest in the stick insects.”

The service was led by The Revd Chris Moorsom, Canon Precentor, to thank God for the creatures on earth and to pray for respect for all living things.

Hymns included All Creatures of our God and King and All Things Bright and Beautiful and there were animal poems and readings. 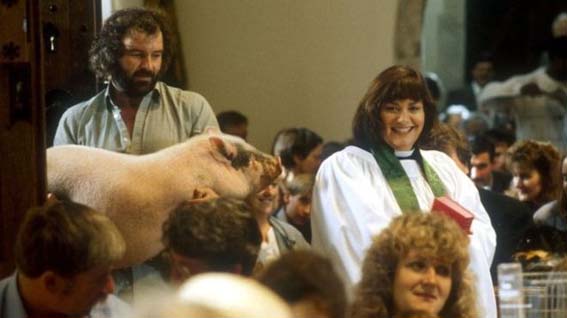 Previous: Wild about our wall art!
Next: Pygmy pair arrive