Primate keepers had a surprise when they spotted black howler monkey Avyanna giving birth in her outdoor enclosure. 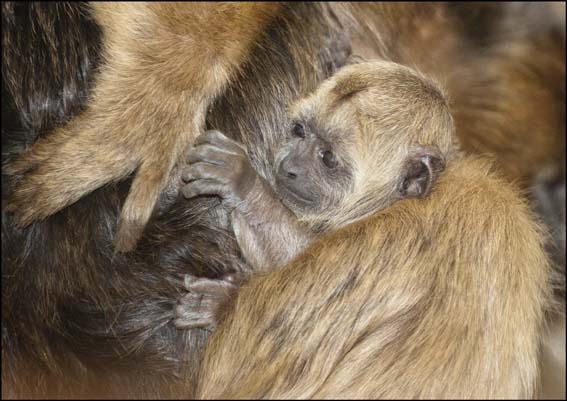 The new baby is the second black howler monkey to be born in DZG’s 76-year history as part of a European stud book-managed breeding programme and arrives just 10 months after big brother, Arie.

Upper Primates Section Leader, Pat Stevens, said: “We were expecting another baby, but not this soon after Arie, so it was a bit of a shock when I discovered her giving birth.

“We had noticed Arie was staying very close to his mum during the morning and making little grunting noises but it turned out Avyanna was in labour and he was obviously feeling a little jealous.

“She gave birth outside during the afternoon and the baby crawled up her stomach and latched on to feed straight away. Both mum and baby are doing really well and Arie and Dargie are sticking together and keeping out of her way for the time being.”

It will be a few weeks until keepers are able to sex the youngster, who will remain dependent on mum for around 18 months.

Four year-old Avyanna and dad, five year-old Dargie, plus Arie and new baby are based in the upper level Small Primates House.

Black howler monkeys are one of the largest species of primate found in Central and South America, but only the males are black in colour as females and juveniles have light coloured fur.

They are called howlers because of their unique howl call which can be heard up to five kms away.