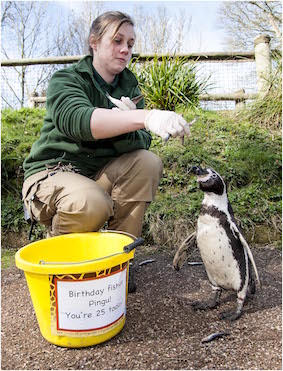 Senior Keeper, Rachel Marson made sure he had the first pick of the sprats during the breakfast feed in Penguin Bay this morning.

And he’s very special to us as he was one of the founding hand-reareds who started the DZG colony back in 1991.

Curator Richard Brown, said: “We have one of the largest colonies of Humboldt penguins in the UK and Pingu’s relatives have helped start colonies at other wildlife attractions across the UK.”

Join Presenters for the 3pm talk and feed  where you’ll be able to see Pingu and his extended family!

And celebrations continue tomorrow as we mark World Penguin Day, an annual event to coincide with the annual northern migration of penguins and we’ll also be revealing a new addition

Previous: Earl of Dudley
Next: Playing mum to penguin chick