Trainee keeper, Clare Westwood, was delighted to free a moulting camel from her last tuft of hair  just in time for her second birthday, today. 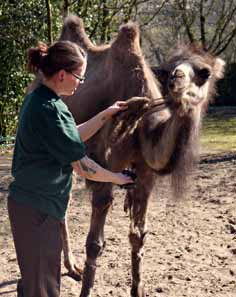 Bactrian camel, Jimandi, had shed most of her shaggy fur except for a long beard which had become matted, so Clare decided to reach for the scissors.

She said: “Jimandi is quite fussy, and it has been a real achievement to build her trust, but she is warming to being groomed. She was rubbing to try to remove the beard so I ?gave her a helping hand.”

Male Charles, who shares the enclosure, is sporting a very different fashion statement  a thick, messy, shaggy coat  which has prompted visitors to comment on Jimandi’s lack of locks.

Clare added: “She does look a state, but it’s nothing to worry about. Unfortunately, it just doesn’t look very nice when it happens, and Charles will go through the exactly same process later in the year.” 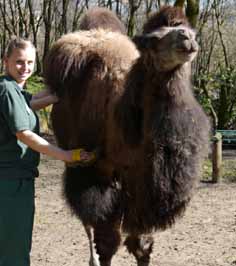 Bactrians’ waterproof thick coats also serve as insulation and shed large chunks of fur in the summer to keep them cool.

Story and pix by Suzanne Jordan

Previous: Partnership a roaring success
Next: It’s Freddie the Scarecrow