A new male sea lion  and his head trainer  have arrived at Dudley Zoo from the French Riviera. 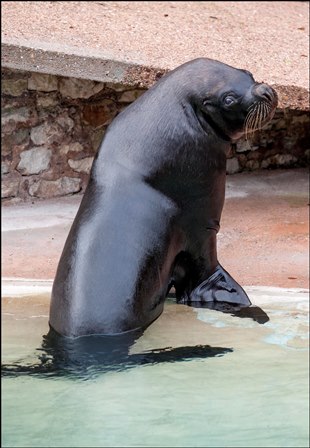 The 14-year-old Patagonian sea lion, called Oba, has joined our two females at DZG after being transferred from Marineland in Antibes yesterday.

Oba, who weighs in at 237kg (more than 37 stone), travelled by road and ferry to the Castle Hill attraction in air-conditioned transport.

Marineland’s Head Sea lion Trainer, Nicky Dancey, travelled with Oba to Dudley. She wanted to help settle him in and show DZG keepers what actions he has been trained to do.

For medical purposes, Oba has been taught to perform lots of techniques including opening his mouth, having eye drops put in and going on a weighing scale.

He has also mastered several other skills including staying on a podium, giving a wave, having a cuddle and taking objects in his mouth.

DZG Assistant Curator Richard Brown said we had always intended to build up the group after the terribly sad death of 22-year-old male Orry, a great favourite who died last July.

He said the last few days had been very exciting for the zoo.

Richard said: “We’ve gone from one to three sea lions in a matter of days and our new interactive Castle Creatures exhibit which features live animals has opened in the same week.

“Last week 18-year-old female sea lion Deisy arrived from Toulouse and she is settling in very well. She’ll be a wonderful companion for Cleo, who is now 26.

“Oba has also learned several husbandry techniques such as staying still and lifting his flippers so he should be a very popular addition to our collection here.”

Head Trainer Nicky said: “He likes to play with a plastic barrel with holes in it. We used to put fish in the barrel and hang it in his enclosure or drop it in his pool and he enjoyed bashing it around to make the fish drop out.  We’ll all miss him at Marineland but this will be a great new home for him. He’ll just have to get used to the Black Country accent!” 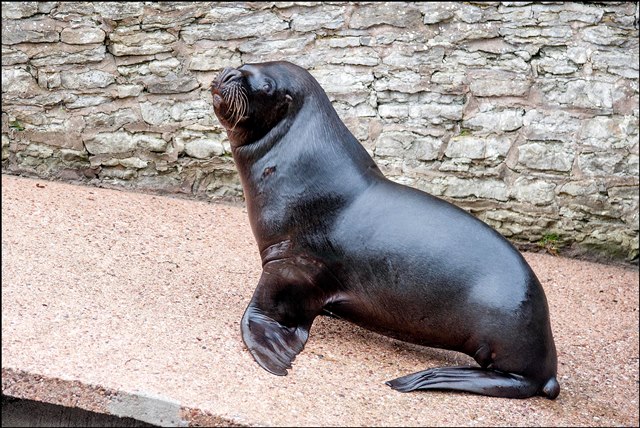 See Oba’s arrival in our view below………

The Sea lion Pool is set in the original moat of 11th century Castle and divided into two pools. It is one of 12 eye-catching Tecton structures at DZG and has recently undergone renovation work by our in-house specialists.

Supported by Heritage Lottery Fund West Midlands, a £1.15million project to restore the zoo’s iconic wave Entrance, Safari Shop, Bear Ravine and Kiosk One to their former 1930’s glory has already been completed.

DZG has the world’s largest single collection of Tectons designed by Russian-born Berthold Lubetkin, widely recognised as one of the most outstanding architects of the 1930s. The collection was awarded World Monument status in 2009.