Dedicated DZG supporters, Joy and Gordon Norris, celebrated 50 golden years together by purchasing a bench for the zoo’s Sensory Garden. 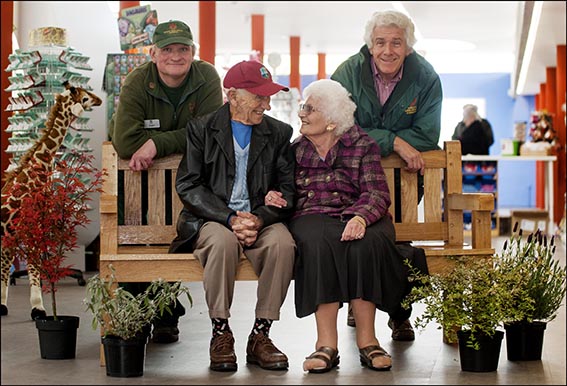 The couple from Wordsley, whose son Ivor has been one of the site’s gardeners for the last 24 years, also marked their milestone anniversary by donating money for a plaque for the wooden seat and new plants for the garden as well as adopting Granville the Great Grey Owl  Joy’s favourite animal.

Joy, aged 84, said: “DZG is a very special place to both Gordon and I as we always spent our anniversary at the zoo up until five-years-ago, when our mobility prevented us from getting there easily.

“In 45 years-old I think we only missed four visits when we were in Barbados, where Gordon was born.

The pair met 50 years ago following the death of Joy’s first husband  a musician  after Gordon, 88, read a tribute piece about him in the local newspaper.

After writing a letter to Joy, which was passed on to her by the reporter, the couple met up and were married within a month and enjoyed regular trips to the zoo with Ivor and his older brother Paul, as well as grandchildren Sarah and Adrian.

Joy added: “We thought it would be fitting to mark our golden wedding anniversary at a place that holds so many wonderful memories for us as a family and particularly for Ivor who loves working there.”

DZG CEO Peter Suddock, said: “DZG is lucky to have some very loyal supporters and it’s wonderful that Joy and Gordon thought about sharing their golden wedding celebrations with us.

“With their donation we’ve been able to buy quite a few extra plants for the sensory garden, including lavender and an ornamental acer tree, which along with the wooden bench, will be enjoyed and admired by visitors for years to come.”