Animal lovers, Kelvin and Trudi Beaumont, travelled from West Sussex to become Keepers For a Day at DZG. 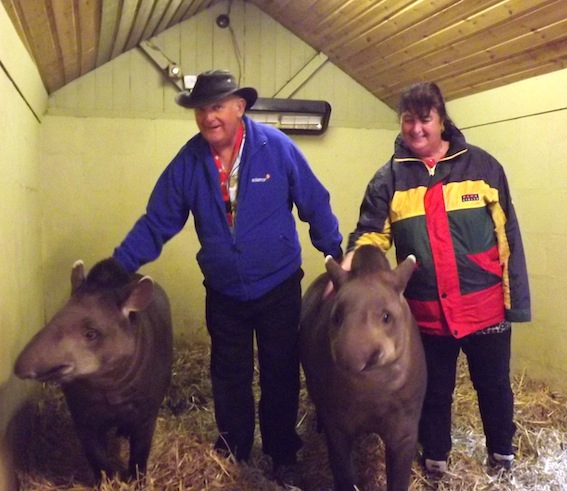 The couple were treated to the experience by friends, who live in Stirchley.

Trudi said: “All the staff we met were fantastic and their enthusiasm and love of both the zoo and animals shone through all day.”

Kelvin and Trudi began their day giving a morning drink to the site’s chimpanzees, before Kelvin took part in a stick tug of war game with baby orang utan, Sprout!

They then met the Lar gibbons and were left surprised at the gentleness of small primates in Lemur Wood.

Next it was on to feed the penguins and to meet the birds of prey, before being introduced to the lynx and going on to feed the tigers and snow leopards.

After lunch Trudi and Kelvin met the sealions and got the unique opportunity to tickle a tapir, before finishing the day feeding the giraffes.

Trudi added: “We had a wonderful experience with all the animals at Dudley Zoo.

“We would thoroughly recommend it. It’s an opportunity to really be in contact with animals, many of whom without the charitable support would just vanish.”

It wasn’t just Trudi and Kelvin who enjoyed their DZG experience that day.

It was their friend, Monica Catley, who purchased the unique gift for them and Monica and her granddaughter, Astrid, accompanied the couple during the day.

Monica said: “While Trudi and Kelvin were in the bird of prey house, I was standing outside with Astrid, who is terrified of all birds.

“Two female keepers arrived in a van and got out a kestrel in front of us. When they saw how scared Astrid was they encouraged her to go inside the building and they even eventually got her to hold it and let it fly to her.

“I cannot thank these girls enough. It was amazing to see them with her and now she’s not so scared of birds.”