DZG is celebrating the patter of six pairs of tiny feet – after a bat baby boom in our Castle Creatures exhibit. 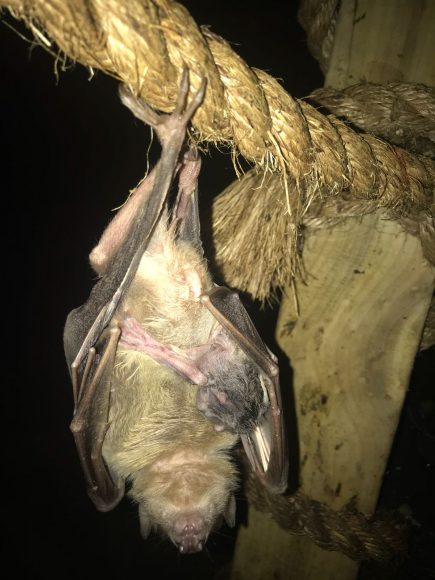 The six baby Egyptian fruit bats are just days old and can been spotted curled up under the wings of their mums.

And delighted keepers say we have more bat babies on the way as there are other expectant mums in the 70-strong group of Egyptian fruit and Seba’s short-tailed bats inside the 11th century Dudley Castle exhibit.

Trainee keeper, Cara Sheldon, said: “All mums and pups are doing well. The youngsters will remain enfolded in mum’s wing for a few weeks yet for feeding and cleaning and we’ll expect them to begin flying at around ten weeks old.

“As the babies start to get heavier, the mums will park them while they go off to get food and will then come back to pick them up. The babies all tend to stay in a nursery group.”

The Egyptian fruit bat is the only fruit bat species in the wild in Europe. Mothers give birth after a four-month gestation period, usually to just one baby, and while hanging upside down in the roosting position.

Babies don’t wean until after six to ten weeks, when they will then fly off in search of their own food, but they’ll remain with their mothers until around nine months of age.