Barney, the hand reared young Bennett’s wallaby, is back living at the zoo and in the last few days even had his first experience of snow!

His successful move back on site is testament to the dedication and hard work of Senior Keeper Laura Robbins, who stepped in to provide surrogate care to the joey following the sudden death of his mum, while he was still nursing in her pouch.

After four-months living at Laura’s home with her young family, Barney is now back with the rest of the troop in Wallaby Walkthrough and is having a great time!

Laura said: “Barney has settled back in with the others so well. 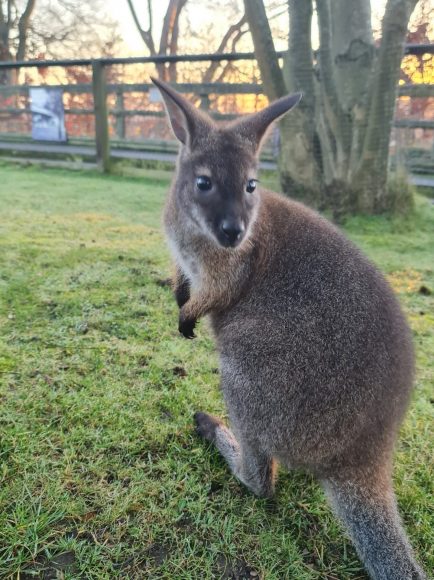 “It did break my heart to move him back, but this was always the aim.

“He’s still having a bottle of milk in the morning, which he’ll continue to have until the spring, but my job is done and I couldn’t be prouder.

“I still make sure I go and see him when I’m in work and he hops up to say hello and then runs around the paddock in excitement, which is very amusing to watch.

“And I’ve been instructed to keep taking videos and photos of him so the children can keep seeing him as they’re missing having him at home.”

And just a few weeks after his move back, Barney got to play in his first flurry of snow!

Laura added: “He was really interested at first and wanted to try and eat it, but soon realised it didn’t taste nice, but he tried really hard to get to the leaves that were frozen underneath it!”

Assistant Curator Jay Haywood said: “Laura has spent the last few weeks preparing Barney for his return by introducing him to his new surroundings and he settled in full-time better than we expected.

“He’s already very independent, but seems to be enjoying the company of the other wallabies, which is exactly how he should be which is all thanks to Laura’s hard work over the last few months.”