Following the popularity of our five-storey bug hotel which is always fully booked with critters, we’re looking to expand the guesthouse empire, but need YOUR help! 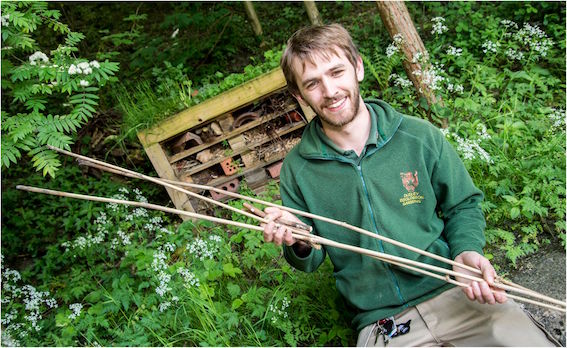 There are thousands of insect species living across our 40-acre zoo site, which all play an important role in contributing to the eco system.

Here at DZG we want to encourage them even further by making more bug-friendly hotels, so are appealing for unwanted bamboo garden canes which we can use.

Conservation Officer, Chris Leeson, pictured above, said: “The bug house on the zoo’s Snail Trail pathway has proved so popular since we built it last year, that we want to add more around the site, of all shapes and sizes, to encourage a higher diversity in invertebrates.

“The hollow stems of garden canes are ideal shelters for insects and provide somewhere safe for them to lay eggs or hibernate in over the winter and they’re particularly good for solitary bees too.

“So we’re hoping green fingered gardeners can help us out by donating any unwanted bamboo canes.”

Garden canes can be handed into the Safari Shop at the zoo entrance.

And huge thanks to BIRMINGHAM BOTANICAL GARDENS who have already helped us out with a donation!

They’re the most diverse and ecologically important group of animals in land habitats, as they eat pests, pollinate plants and attract other wildlife like birds.

Previous: Rockers are a hit!
Next: Splendid looking camels