We’ve welcomed another minute marmoset to our pygmy pack – the 15th baby to mum Pam and dad Hendrix. 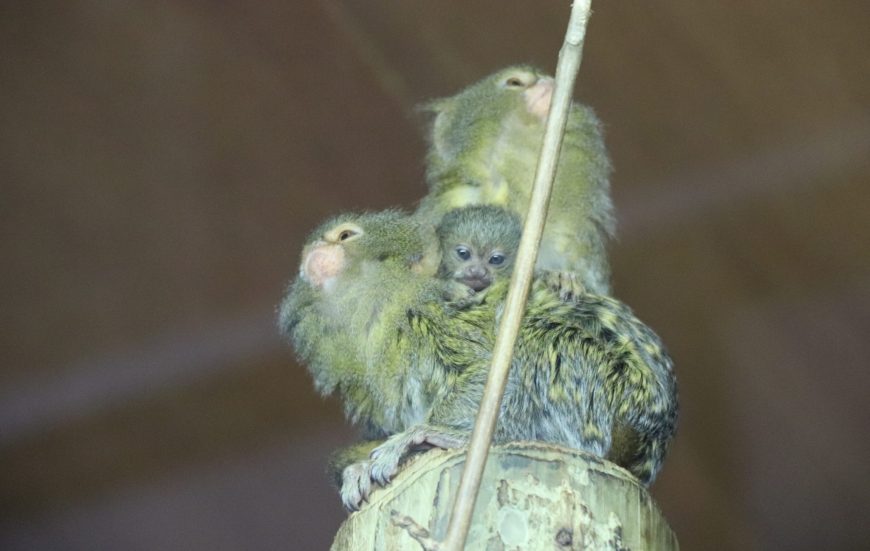 The tiny pygmy marmoset baby, pictured with its mum and dad, arrived on September 30 and is being well looked after by several members of the growing group.

We now have a total of 15 pygmy marmosets, the parents and thirteen youngsters as two of the offspring were sent to boost another collection a while ago.

Head of Upper Primates, Pat Stevens, said: “It’s great to have another little one and Pam and Hendrix are very experienced parents.

“In the past they’ve had either twins or singletons and this time it was just the one and it’s doing fine. The baby is feeding well from mum who then passes it over to dad to carry round, with several of the youngsters taking their turn to help out too.”

The new arrival won’t be named or sexed for several weeks as keepers have to wait until it begins venturing off on its own to see if we have a boy or a girl.

The pygmy marmoset is the world’s smallest monkey. The dominant female gives birth after a gestation period of 142 days. They have two birth peaks each year, the first usually between May and June and the second between November and January. In captivity approximately 76 per cent of births are non-identical twins. The babies are usually carried by the male and only returned to the female for feeding.

Oh baby… what a cutie!

Previous: On a high after proposal!
Next: More macaws move in!