We’ve welcomed the first ring-tailed babes in the wood! 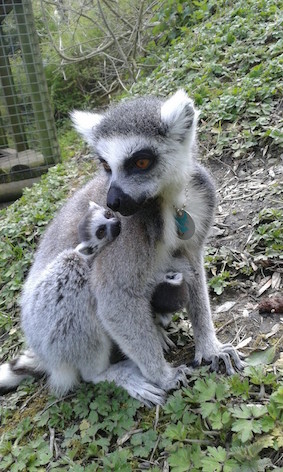 Ring-tailed lemur, Phoebe has given birth to another set of twins and keeper Jade Reddall captured this great photograph and video footage of the new arrivals!

The babies, who were born on April 17, are the eighth litter for 14 year-old Phoebe – who we reckon must be DZG’s busiest mum!

Section Leader, Pat Stevens, said: “Phoebe is an old pro now, so just gets on with nursing them while also dealing with Itzy, Bitzy, Icarus, Kinich, Nelly, Kelly, Spock and Freya  as well as partner, Frank, who all live in Lemur Wood with her.

“The siblings all seem very excited with the newborns and one of the young boys did take one of the babies off mum and wouldn’t give it back to her, as he wanted to clean it, but she soon got it back and gave him a ticking off.

“The babies are doing very well and Phoebe seems very settled in the walkthrough wood exhibit with them and is happy to show off her new additions to visitors.

“She stopped indoors for a few days when they were first born, but she was soon out and about to deal with the rest of the family.”

The babies will remain on mum for at least 12 weeks, when keepers will be able to sex and name the newbies.

Watch Jade’s video of Phoebe grooming the babies below…