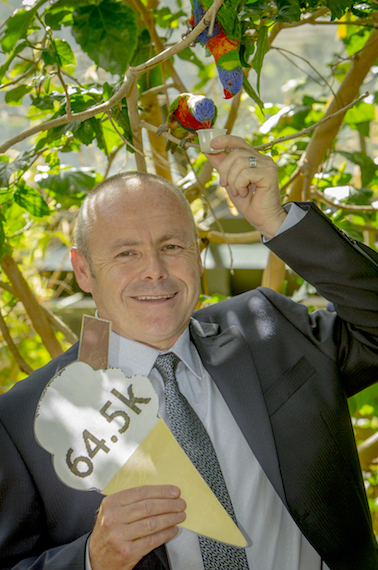 And on August Bank Holiday Monday alone 4,674 visitors flocked through the turnstiles  a record breaking day for almost a decade.

Zoo Director Derek Grove, pictured, said: “We’ve had an incredible holiday period and are delighted with the numbers which we believe to be our best August season in at least 25 years.”

Derek added: “Continual investment across the site and the boost of our animal collection with the opening of Flamingo Falls, Macaques on the Bank and Lorikeet Lookout, as well as the arrival of the giant anteater, have all proved popular additions this year and the pleasant weather and fantastic bank holiday have all helped demonstrate DZG’s continued popularity for a great family day out.”

And the busy holiday season also helped us raise funds for Global Tiger Day, World Lion Day, International Orangutan Day and World Land Trust’s Atlantic Forest appeal as we held awareness days in addition to the daily conservation talks and encounters with some of the world’s rarest animals. Through this fundraising we’re delighted to have sent off £2,500 divided between the four causes, raised through visitor donations and DZG coffers.

Derek said: “Thank you to our wonderful visitors for their continued support. We’re now looking ahead to Halloween and Christmas at DZG and redevelopment work isn’t set to stop anytime soon with the snow leopard enclosure and farm barn revamp next on the agenda.”