Youngsters from Penn Den Art Club have dropped us a giant letter to say thanks for a fantastic night at the panto. 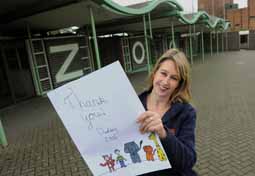 The group, which meets every Saturday morning at Penn United Reformed Church, in Wolverhampton, was among dozens of clubs and organisations from across the region who received free tickets from DZG for the dress rehearsal of Snow White and the Seven Dwarfs, at The Grand Theatre.

We sponsored the performance, featuring Linda Lusardi and Sam Kane, and were delighted when we received the letter from Penn Den.

Tutor, Diane Ashlee, said: “We had an absolutely fabulous evening and would like to say a big thanks to all at DZG who made it possible.

“Everyone of our members had a brilliant time and can’t stop talking about it!”