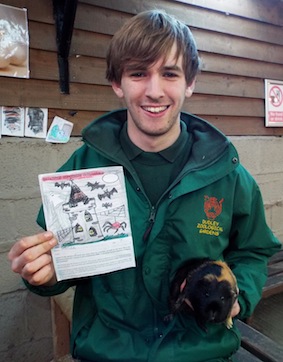 Congratulations to seven-year-old Jessica Bentley, from Bilston, who is now the proud mum’ to red-kneed tarantula, Raptor!

Jessica entered our half-term Hallowe’en colouring competition in the farm barn during her first ever trip to DZG and keepers chose her picture as the winner from the hundreds of entries we had throughout the week. 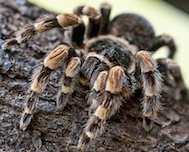 DZG Trainee Keeper, Chris Leeson, pictured right, said: “It was clear that Jessica had put a lot of effort into her picture, because as well as colouring in all the Hallowe’en objects, she’d also added an atmospheric dark background, which made it look very spooky indeed!”

Jessica’s mum, Tracey Head, said: “Jessica’s face was a picture when we told her she had won. It was her first visit to Dudley Zoo with me, her aunty, cousin and little sister, so she can’t wait to come back and show her dad Raptor”

Well done Jessica, a 12-month adoption pack for Raptor is scuttling your way, along with a free entry pass so you can visit him in his Discovery Centre home!