CEO Peter Suddock discovered rock and roll at a nearby sweet factory  in preparation for our 75th anniversary. 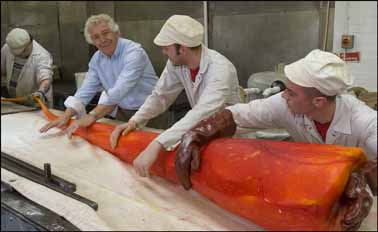 Gray’s factory, in North Street, Dudley, has supplied the Zoo with rock and sweets since it opened its turnstiles to visitors on May 6, 1937, and has sold confectionery at the Castle site for more than a century.

Mr Suddock said:?”Sticks of rock are a big tradition at Dudley Zoo – we’ve sold millions since we opened to the public in 1937 and they are still as popular as ever in our gift shop.

“Weve had a special batch made for our anniversary and were delighted when Gray’s asked if we would like to see it being made.” 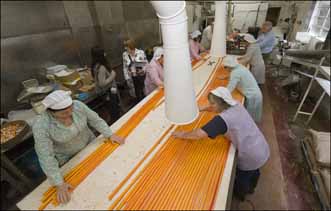 The rock is made to a recipe that has been handed down generations of the Gray family. A huge vat of boiled sugar is poured on to a long factory table and dozens of members of staff help roll it into a confectionery coil which is then cut into sticks of rock as the sugary mass cools.

Brand stickers are attached to the sticks which are then twist-wrapped in cellophane ready for sale.

Mr Gray said:?”We’ve been associated with Dudley Zoo for so many years we thought it only fitting to make a special anniversary batch to mark the 75th birthday.” 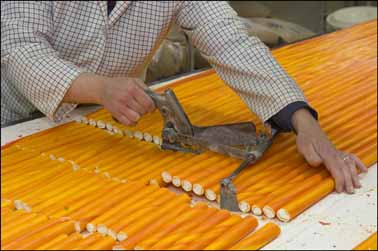 Birthday celebrations throughout the May Bank Holiday at DZG include the launch of Penguin Bay, a walkthrough experience that allows visitors to get close to the site’s 70-strong colony of rare Humboldts  one of the largest on Europe  via decking walkways and glass-panel viewing platforms.

More than 1,000 sticks of rock are rolled out of the sugared strands. 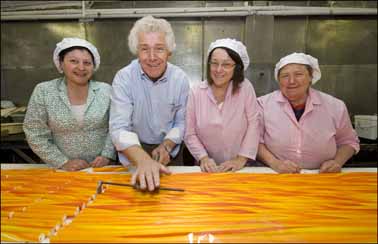 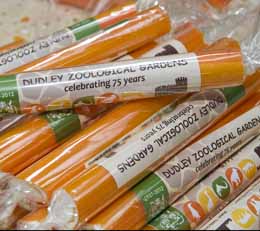 Previous: Rock of ages!
Next: From the Archives