We’re marking a year of Castle Creatures today  and celebrating with the arrival of four baby bats! 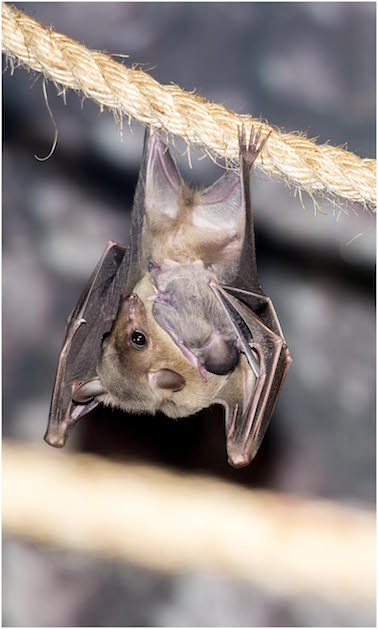 DZ Photographer Jason Skarratt snapped this photo of one of the new arrivals shortly after its birth  with the newborn snuggled tightly on mum’s chest.

Trainee Keeper, Cara Sheldon, said: “So far we’ve got three Egyptian fruit bat babies and one Seba’s short-tailed bat, but I think we’ve got a few more expectant mums as well which is great news.”

The £250,000 medieval experience inside the 11th century Dudley Castle, which was funded by the European Regional Development Fund, tells the story of the Earl of Dudley’s family and explains the history of the castle and has been a popular addition to DZ since its launch in May 2015.

As well as interactive games, it also houses a number of animal exhibits, including the bats, to show how medieval folk lived in close proximity with various species as part of everyday life.

Zoo Director Derek Grove, said: “Castle Creatures has been a huge success and the feedback over the last 12 months has been really positive from visitors.

“It has achieved its objective to integrate the castle more in with the animal collection and it’s also a great way to help us pass on conservation messages about all kinds of animal species, not just the endangered ones as well as providing a fun way to learn historical facts about the castle.”

Egyptian fruit bats give birth after a four month gestation period, usually to just one baby, and while hanging upside down in the roosting position.

Once the pup is born she enfolds its in her wings to protect it from other bats and will carry it around up to six weeks.

Babies don’t wean until after six to ten weeks, when it will then fly off in search of its own food, but they’ll remain with its mother until around nine months of age.