Keeper Laura Robbins thought she’d struck gold when she found an old coin while clearing out the bush dogs’ paddock . . . 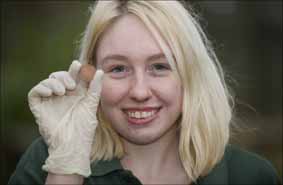 Her discovery turned out to be a 1957 halfpenny that had been stuck in the ground for several decades!

She said: “I came across it when we were doing some work in the bush dogs’ enclosure and at first I thought it was a bit of rubbish, but when I had a closer look I realised it was a piece of metal so I popped it in my pocket until we’d finished and then cleaned it off under the tap.”

Laura, aged 23, added: “I hadn’t a clue what it was, but when I showed it to other members of staff they told me it was a halfpenny. I’d never seen one before, it’s amazing what you find around the zoo!”

The British halfpenny, which enjoyed an impressive 700-year history, was originally made from silver but later manufactured from base metals. It was abandoned in 1969 with the introduction of decimalisation.

CAPTION: Laura with the 1957 halfpenny she discovered in the bush dogs’ paddock.