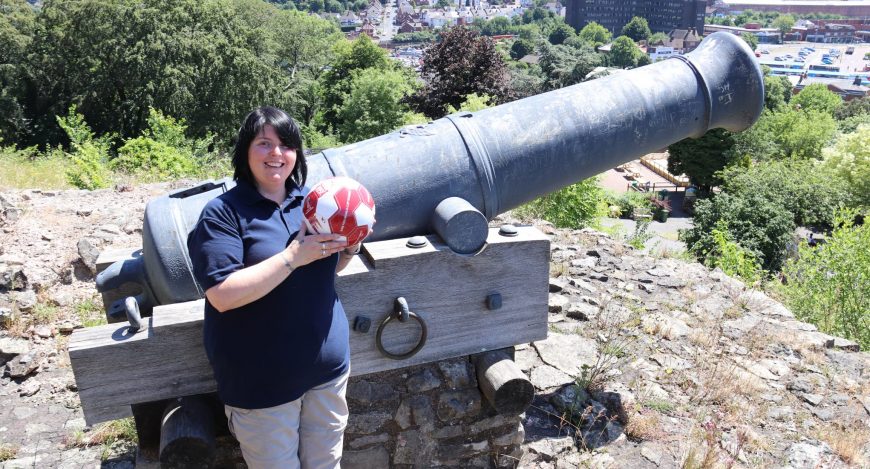 As the nation prepares to get behind England in their World Cup round of 16 clash with Colombia in Moscow, footy fan and Education Assistant Amy recalls how the two Russian cannons at the foot of the castle were deactivated after being fired into Dudley town just over 100 years ago.

The cannons, which each bear the double-headed eagle of the imperial crest, were brought back as trophies from the Crimean War and were thought to be part of a group of cannons taken at the siege of Sevastopol (1854 -1855).

The then Earl of Dudley had taken a keen interest in the war and was a great supporter of the troops, even chartering a ship to take out supplies.

As a ‘reward’, the Earl was given the two cannons and they were installed on the remains of the two south facing towers of Dudley Castle in June 1857.

Amy said: “Amazingly the cannons were fired in situ in 1913 when some local youths came on site, filled them with stones and rocks and fired them into the town.

“The castle grounds were shut down until the lads gave themselves up and then they were each fined a penny. To stop it happening again the cannons were spiked, meaning the firing mechanism was taken away.

“As we get into the latter stages of the World Cup 2018, the cannons are one of the Russian connections to Dudley. Another is that Dudley Castle is one of the highest points of land in Europe and the next highest point of land to the west is the Ural Mountains in Russia.

“I’d like to wish all our boys good luck tonight. Let’s have plenty of shots on target!”