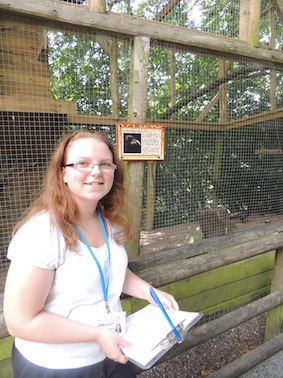 Seventeen-year-old, Laura Guest, spent four weeks of her summer holiday on site watching how Jill interacted with visitors during the day.

Laura, who is completing the animal science study through the Nuffield Foundation research bursary project, spent five hours each day recording minute-long observations about how Jill behaved and how many visitors were at her enclosure.

Laura, a sixth-form student at RSA Academy in Tipton, said: “I had two hypotheses that I wanted to test. I wanted to see if visitors stimulated Jill to become more active, or if Jill was active, did that tempt visitors to stay and watch her for longer than if she was just sitting on her branch.

“So far, I’ve definitely discovered Jill behaves how she wants when she wants, but visitors do remain at her enclosure for longer if she’s up close to the fence.”

After being abandoned as a chick, Jill was hand-reared and resides at DZG as she lacks the skills to be able to survive in the wild. But her lively and inquisitive nature ensures she’s a firm favourite on site.

Following three weeks of close study, Laura, had to collate all her information and produce a 17-page report on her findings, alongside analytical graphs and tables. 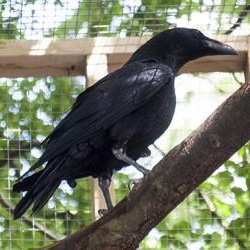 “She’s very responsive if I’m here on my own. We had a three-minute conversation of us both saying hello to each other and she began bringing me sticks, which she passed through the fence to me and put her head up against the mesh for me to scratch her.

“She’s more active in a morning, which is probably because she’s about to get fed, but I’ve also noticed she eats her breakfast in a certain way. She’ll eat her bread immediately, but leave her egg, but then puts her fish on the floor and covers it over.

“She’ll then go back to eat her egg later in the day when she’ll also uncover and tuck into the fish.”

DZG Registrar and Research Co-ordinator, Dr David Beeston, said: “We’re delighted to support Laura with her bird behaviour project here at DZG and are glad she was able to get so much out of her time with us.

“She’s also been working alongside myself on a few projects and has shown a keen interest in carrying out other animal behaviour studies for us at a later date.”

Previous: Chernobyl children explore DZG
Next: Why we love tigers!