Juvenile black howler monkey, Arie is living up to his species name as his fur begins to change colour. 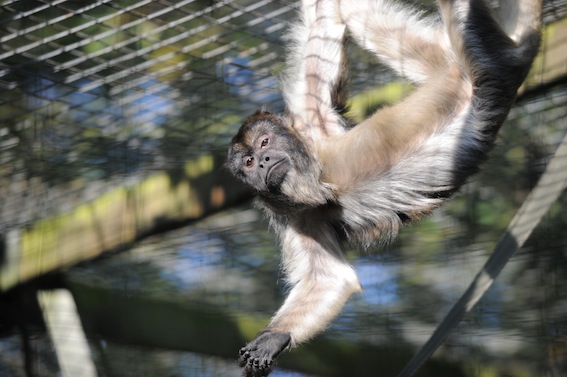 The two-year-old is beginning to lose his juvenile sandy coloured fur and turn black  something which only the males of the species do.

Upper Primates Section Leader, Pat Stevens, said: “It’s almost as if Arie’s changed colour overnight, as we’ve suddenly noticed a real difference in his appearance. He’s going very dark on his face and back, although he’s still light coloured on his stomach.

“He’s starting to look more and more like his dad now and is already sporting a black beard around his chin.

“He’s growing up very quickly and it won’t be long until the other boys follow suit and go darker too.”

Arie is the first born of mum, Avyanna and dad, Dargie, who also have sons, Becks,Tyson and newborn, Shelby.

Black howler monkeys are also known for their iconic howl’ call, which can be heard by humans up to five kms away.

The primates have a special voice box and pouch in their throats that amplifies the sound, which enables groups to keep in touch with each other.

Pat added: “Both sexes will call, but the male is much louder and deeper. Arie is also starting to mimic his dad and tries to howl, but he’s not quite there yet and needs to get quite a lot louder if he wants anyone to hear him!”