DZG volunteer Alice Martin is settling into her new role – half way round the world. 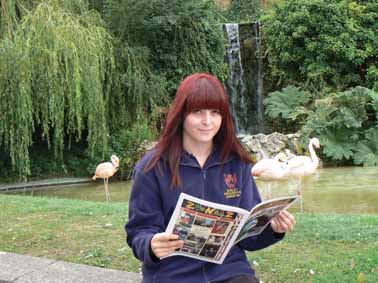 Twenty-three-year-old Alice, from Bushbury, Wolverhampton, who was also a member of our Little Zoo Keeper team, has moved to Japan where she will be teaching English.

She said: “I am really excited about going to Japan, it’s a childhood dream come true.

“I?will be teaching pupils aged three to 14 in a school in Kitakyushu, in the Fukuoka region of Japan.

“It is a year’s contract and I?know it is going to be very different from home, but I?can’t wait to make a start.”

She added:?”The experience I?gained at DZG?has been invaluable in helping me gain this contract. I?shall miss everyone, but will keep in touch.”

Alice will be staying in contact via the zoo’s quarterly ZooNooz magazine which she hopes to use as a teaching aid in Japan.

CEO?Peter Suddock said:?”I am delighted that Alice has taken this opportunity and I wish her every success.

“I look forward to seeing her when she returns and believe her experiences will add to the work we do here at DZG.”

He added: “In the meantime we will be sending out regular copies of ZooNooz to Alice’s new home in Japan.”

CAPTION: Alice Martin:?the former DZG?volunteer will be using the organisation’s quarterly ZooNooz magazine as a teaching aid at a school in Japan.

Previous: Spotlight on Tectons
Next: Brushing up on dental duties