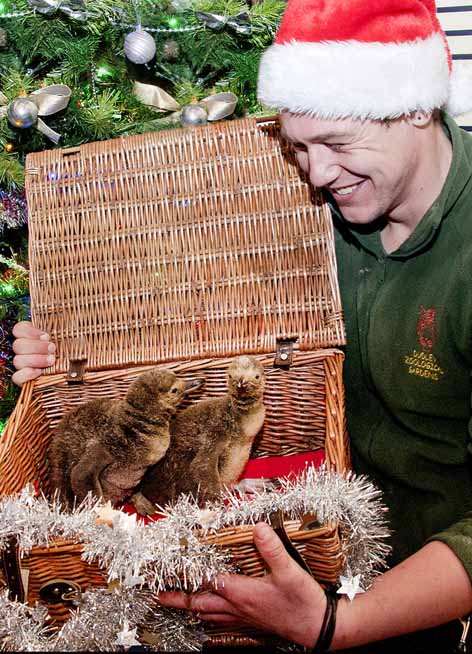 The eight-week-old babies hatched outdoors in the walkthrough Penguin Bay exhibit during a rainstorm and when an inch of water fell in just 30 minutes, it alarmed the mother bird so much that she deserted her chicks.

Team Leader Birds Section, Kellie Piper, said: “It’s the wrong time of year for penguins to breed and the chicks were getting very wet and cold and would not have survived if we didn’t intervene.”

The babes, who have been temporarily named Holly and Ivy by staff until their sexes are identified, were taken indoors and put beneath a heat lamp in the aviaries, where they are being cared for by keepers.

Kellie added: “We are feeding them three times a day. We started them off on a mixture of blended sprats, sea salt and water which we administered using a syringe and now they are taking tiny chunks of fish, which is what they’ll be eating on Christmas Day.”   DZG is home to the UK’s largest parent-reared colony with more than 70 of the endangered birds roaming freely in a walkthrough enclosure, and the youngsters will be reunited with the rest of the colony when they have developed their juvenile plumage.

CAPTION: Bird keeper Ben Vanes with Holly and Ivy, two rare Humboldt penguin chicks that are being hand reared by staff after they were abandoned by their mother when a rainstorm flooded their nest.

Previous: Two days to go!
Next: Happy Christmas to all!