A newly-married husband and wife from Stoke-on-Trent had a Valentine’s Day to remember, when they became DZG keepers! 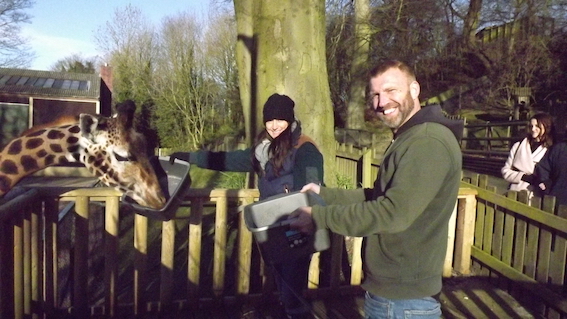 Despite Francine Barrow having no interest in animals, she selflessly surprised her animal-loving hubby, David with the experience and said it was the best present she could have ever got for him!

Francine said: “It was an absolutely fantastic experience and David was really shocked. The keepers were all incredibly knowledgeable and really helpful and they spent a lot of time talking about the feeding, cleaning and animal care.”

The couple, who married in December, spent the day shadowing keepers around the site as they went about their day-to-day tasks and worked alongside a variety of animals including big cats, birds and primates.

Francine added: “David is an engineer by trade, but has always regretted not doing animal science, so I booked it up to give him an insight into zoo keeping, in case it’s something he’d be interested in pursuing.

“He came away with a completely different view to what he started with. The job is a lot harder than he originally estimated, I think. It’s very labour intensive and hard work.

“The bird section was his favourite, because he’s really into his falconry and owns his own Harris Hawk, but the lions also surprised him.

“I couldn’t go anywhere near them, they were much too intimidating for me, but we both didn’t appreciate the sheer size of them and we definitely didn’t expect to be able to get so close to them and feed them meat.

“The whole experience was so worth the money and seeing David have such an incredible time made the day for me.

“We’re definitely coming back later in the year for a family visit, as we can’t wait to show our three children the animals we met.”