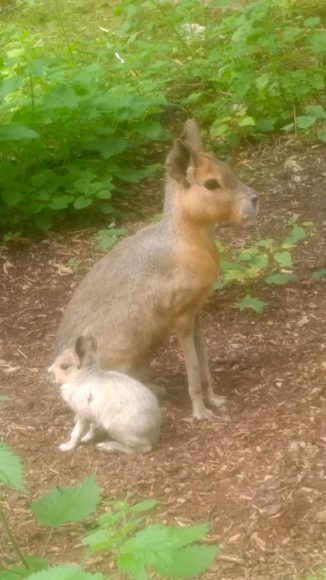 We’ve had another mara born and this one is quite unique.

The youngster was born to mum, Martha and dad, Lenny on June 9 and staff were surprised to see it’s very pale colouring, instead of the normal brown and grey.

Curator Richard Brown said: “We believe the baby has a condition called leucism, which means it’s lacking in pigment resulting in the white looking coat.

“It seems to be strong and healthy and at least we’ll be able to identify it from the others, who all look the same!”

Keepers won’t know the sex of the newborn until they catch it up for microchipping in a few weeks’ time.

The mara group can be found sharing an enclosure with the Howler monkeys, after relocating in March to form a successful mixed South American exhibit.

The Patagonian mara is the third largest rodent species in the world and is classed as near threatened on the IUCN Red Data list due to the loss of its habitat.