An animal loving dad and daughter had a truly memorable experience when they became keepers for the day to celebrate a big birthday.

Julia Rowland, from Wall Heath, was treated to the day out by her husband for her 50th birthday, who also booked for her dad, Alan Thomson, from Sedgley, to accompany her. 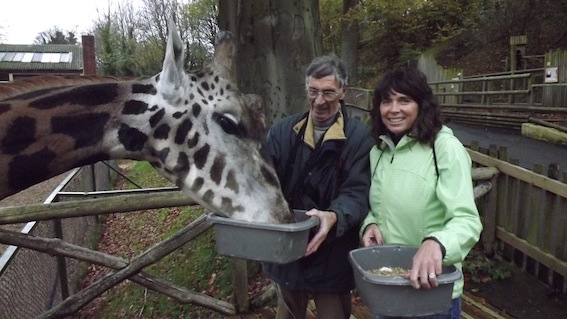 Julia said: “It was an absolute delight and privilege to participate in the experience which touched Dad and I more than we ever expected and reinforced our feelings for our two and four legged friends.”

During their jam-packed day, Julia and Alan worked alongside DZG staff from 10am until 4pm, as they were introduced to some of the site’s 200 species, which included some of the rarest animals in the world.

Julia added: “Every one of the keepers were clearly completely dedicated to the animals and their welfare. They oozed enthusiasm, passed on their knowledge freely and allowed us to share in the wonderful rapports that they have with the animals in their care.

“Having been to Dudley Zoo as a child and then with my own children I have seen the very many changes that have taken place over more years than I care to admit to. The changes are very much for the better and having not visited for a while it is very clear that the place has come to life again and animal welfare is a priority.”