Summer isn’t usually the season associated with reindeer, but on the hottest day of the year so far we welcomed a new arrival! 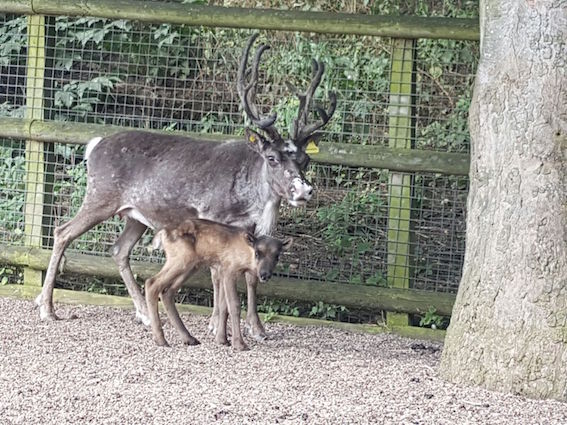 Seven-year-old Lily gave birth to a baby in the early hours of yesterday and the youngster has taken its first steps outside in the paddock this morning.

DZG Senior Keeper Sarah Evans, said: “Lily kept the calf inside for 24 hours, even though she had continual access to the outside, which was possibly because of the heat.

“She was very protective over the newborn and was pushing the other reindeer back out if they tried to come in to them during the day.

“But today, as it’s slightly cooler, she brought it outside with the rest of the herd. It’s been feeding really well, although we haven’t gone close enough to it to find out its sex just yet.”

Reindeer calves are typically born around April following a gestation period of seven months and births at this time of year are fairly rare.

Sarah added: “The rutting season usually begins in September, but we brought in a new alpha male called Ghost to the herd shortly before Christmas, from the Scottish Deer Centre in Cupar, Fife, who obviously got straight down to business!

“It’s wonderful to have the pitter patter of tiny hooves again out in the paddock and fingers crossed there’s a possibility the youngster may also have some more little playmates very soon.”

Previous: New arrivals at DZG!
Next: The Pokémon hunt’s on!