When Anita and David While first got together in the 1980s they never imagined they had already met 20 years earlier during a special trip to Dudley Zoological Gardens.

Back in 1966 the couple, then aged five and eight, were part of a group of 10 children’s competition winners for their local weekly newspaper – the now-defunct Midlands Chronicle and Free Press – who won the chance to visit DZG’s pets corner to meet the domestic animals and feature in a page spread about their trip. 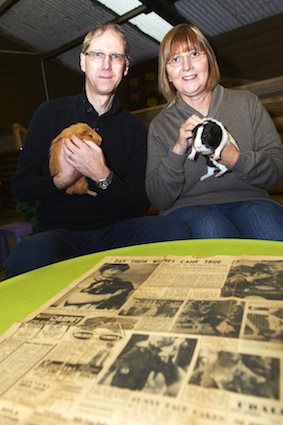 Fast-forward two decades when Anita was sorting through her collection of newspaper cuttings and David spotted the familiar yellowing zoo story in the pile.

He said: “I noticed she had the zoo cutting with my photo on, so I asked her why she had it and she said it was because she was on it and pointed to the large photo at the top of the page of a girl holding a goat, so I told her I was the little boy in two of the photographs in the duffle coat.”

Anita said: “We were stunned. It is such a coincidence and we had no idea until that moment that we had met each other before.

“David’s brother then found out about the cutting and told everyone at our wedding.”

David, an associate head at Birmingham City University and Anita, a primary school headteacher, recently returned to DZG for a trip down memory lane and recreated their visit 47 years on with the domestic animals down on the farm.

David, 53, said: “I remember we had to write a report about how we felt about the zoo re-stocking their pets corner with domestic animals. 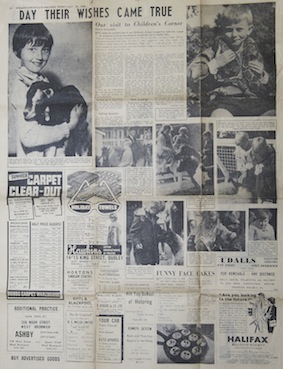 “The winners all had a letter sent to them, which Anita has also kept, which said we needed to meet at the gates after school at 4.15pm, where we would be met by the Zoo Curator, Mr L Cahill, taken to meet the animals, which were where the sensory garden is now and returned to the main gate an hour later to meet our parents.

“I really wanted to cuddle a lamb, but it was too big for me to hold as I was one of the youngest and smallest in the group, so I got to bottle feed it instead.”

Anita said: “I remember we went up on the chairlift, which was the first time many of us been on it and I held a kid goat.

“And all the time the photograph was being taken, the mother goat was behind me and kept butting me with her head as I had her baby.”

The couple, from Cannock, have continued their special link with DZG over the years, with Anita taking part in a Keeper for a Day as well as a tiger feed experience and the pair are also booking up a joint Keeper for a Day to enjoy together in the coming months.

DZG Press Officer, Rachel Hickman said: “David is currently working with DZG on an IT project with 500 computing, telecommunications and network students from Birmingham City University, when he mentioned how he first met Anita.

“What an amazing coincidence and a lovely tale to tell people. We are delighted DZG holds such special memories for them both and following their re-visit they took out annual membership, so we’ll look forward to welcoming them back here again very soon.”

Caption: Top – David and Anita meet some of today’s domestic animals in the Farm Barn during their trip down memory lane while the original newspaper cutting shows eight year-old Anita at the top left of the page while David is pictured twice with baby lambs.