We’re hoping to make a leap for frogkind by highlighting the plight for the popular amphibian. 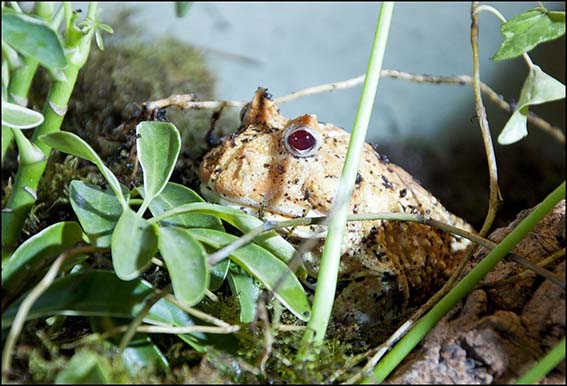 It’s Save the Frogs Day  the eighth annual awareness event for the species and DZG’s Ornate horned frog, Albi, is leading our celebrations.

“We’re hoping to raise awareness of the plight of the declining frog populations and encourage people to help conserve and protect them.”

Frogs are facing a number of threats including habitat destruction, pollution and pesticides, global warming, infectious diseases spread by humans and invasive species.

Dorrie added: “Frogs are so important and their loss could cause irreversible consequences to the planet’s ecosystem.

“They eat mosquitos and ticks; they’re an integral part of the food chain and their tadpoles even help filter our drinking water.”

If you’re on site today, why not visit our frog ambassador, Albi, in the Discovery Centre – pictured above!

Named because of his albino colouring, ornate horned frogs, which are native to East Argentina and East Brazil, are so called because of the fleshy horn-like upper lids above their eyes.

A large frog, measuring 10  15 cms, their mouth spans the entire width of their head, which is an effective method of hunting.

They spend a lot of time buried just below the surface of the ground, well camouflaged, as they wait patiently to swallow their unsuspecting victim whole!