Lorna Pass, from West Yorkshire, has notched up a decade’s worth of penguin adoptions for husband Robin. 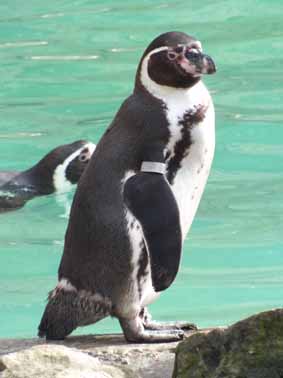 Lorna said:?”Robin has always loved penguins, so I thought it would be a great idea to adopt one for him, and DZG allowed me to name our specific bird.

“I chose the name Pilkington because when Robin was a boy he and his sister Lucy used to make videos and pretend they were reporters for imaginary media station, Pilkington TV!”

Robin and Laura visit Pilkington regularly and have taken part in a penguin feed.

Robin said:?”We are very impressed with DZG’s breeding programme for Humboldts and really enjoy our visits.”

DZG is home to one of the largest groups of Humboldt penguins in Europe, with 70 birds currently in the colony.

The highly successful conservation project has been recognised by BIAZA (the British and Irish Association of Zoos and Aquariums), winning its award for sustained breeding programme.

YOU could become a DZG adopter, too!

Previous: Saki smile of confidence
Next: Scouts Bunk with Beasts