A lack of Christmas adopters has given DZG’s pair of Bactrian camels the festive hump.

Despite an integral nativity role transporting the three wise men to the stable, DZG’s Charlie and Jimandi are feeling a lack of yuletide cheer after Marketing staff revealed they’re the least adopted animals within the zoo’s 1,300-strong collection. 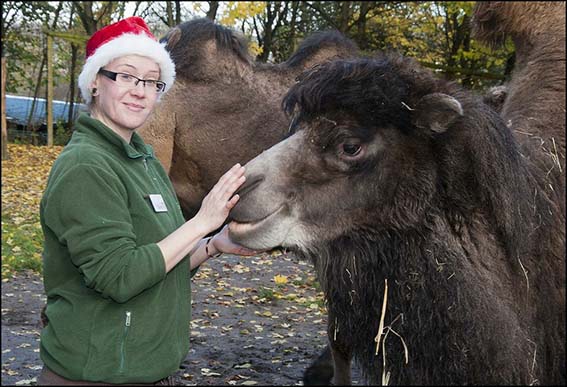 Marketing Manager, Julia Lockett, said: “Charlie and Jimandi are both three-years-old and are really lovely camels.

“It would be great to get them some more adopters for Chrstmas.”

She added: “Adoptions make fantastic gifts for all ages and funds go towards vital wildlife education, conservation and enrichment for some of the rarest animals in the world.   “We have more than 200 species to choose from alongside Charles and Jimandi, and there’s plenty of time to order online (deadline December 18) before the Big Day.”   Adoption packages last 12 months and start from just £30 and adopters receive a certificate, personalised animal photo, gift card and zoo admission ticket.   Bactrian camels are distinguishable by two humps, rather than the single hump of their Arabian relatives, but use them in a similar manner to store body fat which can be digested when food and water is scarce.   DZG holds domesticated camels  pictured above with Trainee Keeper, Clare Westwood  but Bactrians are the only truly wild species that exist today and with less than 1,000 in their native Gobi Desert of Mongolia and China, they are considered to be critically endangered on the red data list.

For more information about the adoption packages on offer call our marketing team on 01384 215301 or click here.