Final touches are being put to an extension of giant anteater, Romy’s enclosure, which includes a two-metre-tall termite mound. 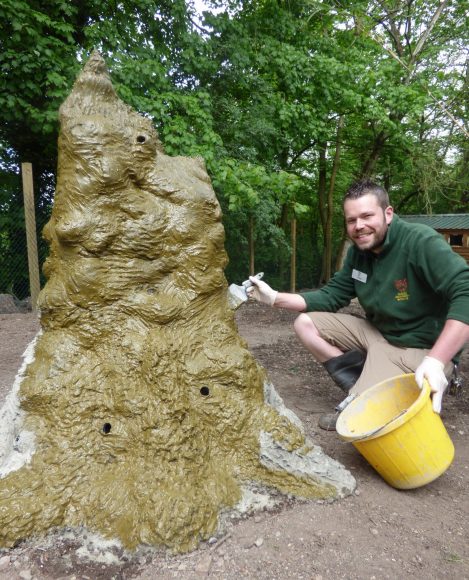 The one-year old anteater moved into her new paddock last month, but only had access to one half, as keepers built her a swimming pool and artificial termite mound

Assistant Curator Jay Haywood, said: “We wanted to encourage her natural behaviour, so we’ve constructed the termite mound out of plastic piping and concrete, building it up in layers to get the right effect.

“There are more than ten holes in the mound, all of differing heights and angles, which we can add removable PVC pipes filled with food into.

“As she would with a real mound, Romy can use her long tongue to lick out the treats inside.”

As well as the termite mound, keepers have also built a swimming pool for the anteater, as the species are known for being great swimmers and use their long snout as a snorkel.

Jay added: “Romy has settled into her new enclosure and it’s great to see her when she’s out and about exploring.

“She’s been spotted in the outdoor arc shelter a few times and she likes wandering round in the afternoon, so we’re hopeful these new enrichment additions will be as much of a hit with her.”