Head Keeper Graham Chilton set a record when he retired from DZG after 45 years  as the longest serving employee in the Zoo’s 74-year history! 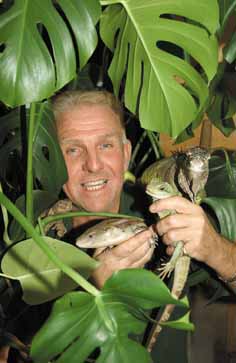 Sixty-one-year-old Graham started work at Dudley Zoo in September 1966 and over the past four-and-a-half decades has worked on most animal sections within the organisation, including big cats, primates and reptiles.

He said:?”It’s been an amazing life; I’ve seen and done so much.

“I’m grateful I had the chance to gain expert knowledge through working with so many rare species including a killer whale and dolphins  that just wouldn’t happen today.”

In 1977 Graham played a leading role in the breeding of Nile crocodiles at DZG.He said: “We made a nest for the eggs using straw, leaves, bark, mulch and elephant dung, and placed a heat lamp over it, so the temperature was a constant 86 degrees.

“We used water sprays to create a humid environment, and at 44 days longitudinal cracks appeared in the shells.

“At 97 days we could hear a young crocodile calling and we helped break its shell so it could survive.”

Graham added: “What a great achievement to have hatched the first captive Nile crocodile in Europe.

“I’ve done so much over the years and am sad to be leaving, but I feel the time is right  I am happy with my achievements.”

Chief Executive, Peter Suddock, said: “Throughout Graham’s 45 years he has always shown dedication and commitment and enthusiastically shared his love of animals with DZG’s visitors.

“His knowledge of the collection, particularly reptiles, is second to none, and his stories spanning the decades are legendary.

“He will be much missed.”

Previous: Teeth and scales for Orry
Next: Jack’s panda adventure