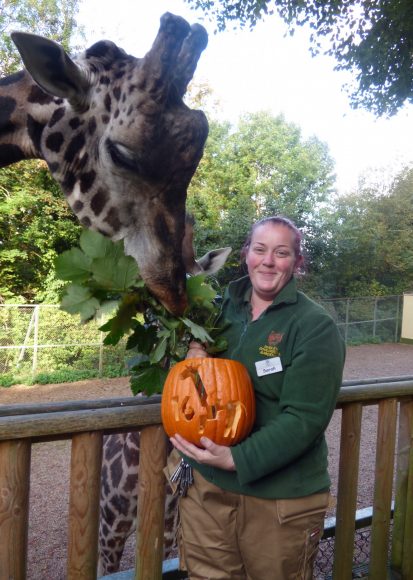 And keepers treated the birthday boy to some of his favourite browse delivered in his own personalised carved pumpkin, as his big day falls in our half term Freak Week – and don’t forget we’re offering discounted admission to visitors this week if they bring along their own carved pumpkins for our Hallowe’en pumpkin patch. 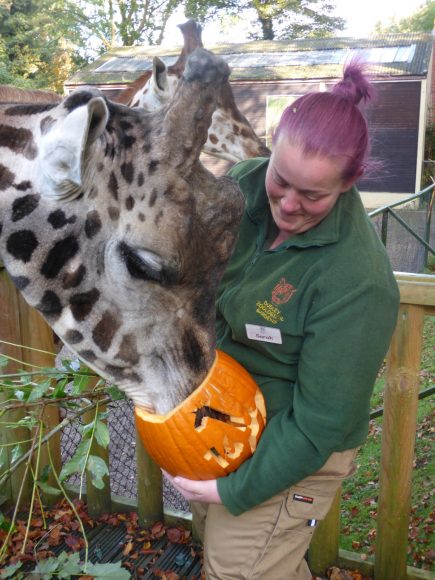 Senior Keeper Sarah Evans, pictured, said: “Kubwa’s a bit of a star and all the staff have a soft spot for him as he’s a real gentle giant.

“He’ll be receiving lots of extra fuss today and will certainly get plenty of visitors as it’s half term.”

If you’re on site today wish him many happy returns as well as learning more about him, his son Kito and Josie during the talk and feed at 12.45pm.

Kubwa also received greetings from a former keeper, who used to look after him at South Lakes Wildlife Park.

Gill Morgan, who now lives in Australia, sent us a Facebook message saying: “I’m so happy to hear Kubwa become a dad, he is an awesome giraffe and always had plenty of character.

“He’s looking good. Give him a carrot from me. I miss him.”