There were smiles all round yesterday afternoon as amateur photographers from across the region celebrated the publication of their DZG images in our 2015 calendar. 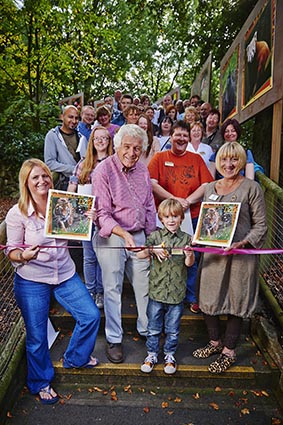 After tea and cupcakes in the Grey Lady Tearoom the winners headed off to the newly-installed outdoor gallery adjacent to the tiger enclosure where six-year-old Daniel Higgins, of Brierley Hill, officially launched the exhibition.

Head of Media and Communications, Jill Hitchman, said: “It was so good to meet the winners and to say thanks for their combined work which has made for a fantastic calendar.   “Within DZG’s 1,300-strong collection we hold some of the most endangered animals on the planet. We’re very privileged to share the lives of these magnificent creatures within the sanctuary that Dudley Zoological Gardens has offered since 1937.   “It’s a passion endorsed by our loyal supporters and that’s who we asked to provide this year’s calendar shots.”   “Competition was tough with more than 200 entries and it was a difficult task as standards were very high, but in the end I whittled it down to 12 monthly images, plus a front cover and seven runners-up shots that I felt should be included.”   She added: “The images offer a glimpse of the wide range of animals at DZG and include visitors’ favourites, with a few of our more unusual species, and I’ve included a quote from each winner about why they chose their shots.   “The calendars are available in the Safari Gift Shop, priced £8.99, and hopefully will be online soon, and sales are already going very well.” 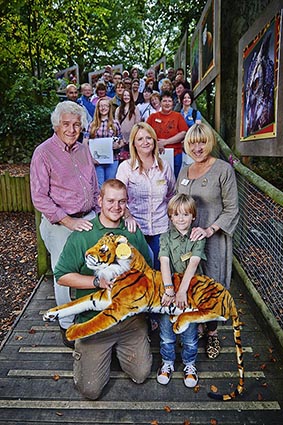 The winning images have also been installed in an outdoor gallery the straddles the upper and lower tiger viewing areas forming an outdoor exhibition.   The gallery was officially opened by six-year-old Daniel Higgins whose mum, Donna Lane took the winning front cover shot.   Jill added: “Daniel is a great ambassador for DZG, he’s a regular visitor, has adopted a Sumatran tiger, and also raised more than £200 for tiger conservation in the wild through a sponsored onesie walk, so we were delighted when he agreed to do the official ribbon cutting.”   As a thank you Daniel was presented with a life-size tiger toy.    He said: “I love Dudley Zoo and this is my best toy ever, I’m going to put it on my bed and think of all my favourite zoo animals before I go to sleep.”

Previous: Who’s who?
Next: All cameras on DZG creatures