A visit to DZG for Edgbaston man, Anthony Collins prompted memories of his great grandfather’s court summons for attempting to steal wallflowers worth two pence from Dudley Castle gardens in 1868! 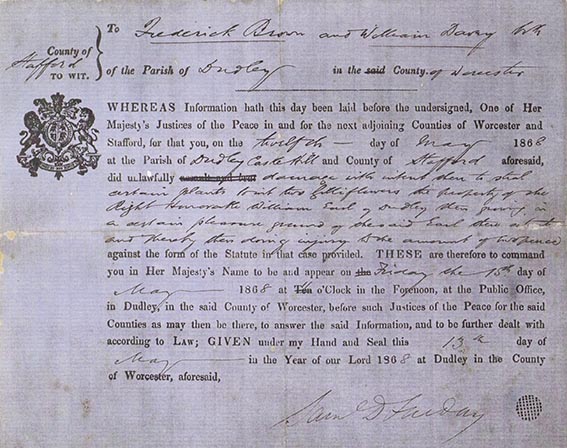 Anthony said: “My great grandfather, Frederick Brown, of Walsall, was arrested at the age of 20 for attempting to steal two wallflowers from the gardens some 147 years ago, and I have a copy of the summons calling him, along with his friend William Darby, to court. 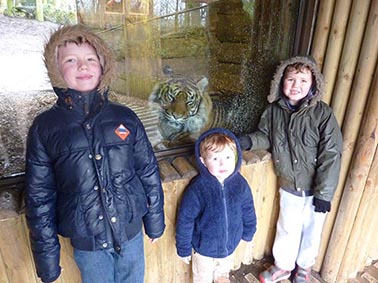 “I recently brought my own grandsons on a visit to DZG, and having learnt that their great, great, great grandfather had received that court summons Jacob, Caleb and Jasper  pictured right  promised to be good!”   He added: “Frederick Brown later went on to start the Walsall Electrical Company and was responsible for bringing trams to the town so perhaps he can be forgiven for being a naughty boy in his youth.”   DZG Head of Media and Communications, Jill Hitchman, said: “It’s an incredible story to think that Frederick was summoned to court for attempting to take wallflowers.    “We can only hazard a guess, but believe the flowers would probably have been within the courtyard of 11th century Dudley Castle, as the grounds surrounding the ruins were dense woodland at that time.   “During the Victorian era the courtyard was used for community events, such as fetes and pageants, so maybe the ‘offence’ was committed at a time when there were people around who saw and reported the petty crime.”   She added: “Thankfully, Frederick’s ancestors were all impeccably behaved on their recent visit and we’d like to say a big thanks for sharing their story.”

Previous: Silver for Tigers!
Next: High praise for DZG