We may not have any pear trees on site, but we do have six rare partridges at DZG this Christmas! 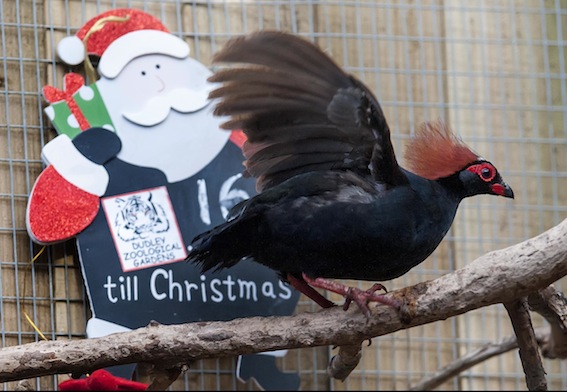 And our adult male roul roul is keen to let you know that there’s just 16 days left until Christmas Day – but don’t get in flap about it, there’s still plenty of time left to get organised!

The male and his five young offspring  two girls and three boys  are currently in off-show heated aviaries for the winter months, but will return to their outdoor aviary in springtime.

This is the first year DZG has bred the tropical partridges, which were hatched in an incubator and reared by keepers after the female failed to sit on them.

An unmistakable and distinctive bird, roul roul partridges are native to the lowland rainforests of Myanmar, Thailand, Malayasia, Sumatra and Borneo.

The male sports a dark plumage with a red crest, while the females have green plumage and a grey head.