DZG has been given the green light for a £1.15 million programme to renovate four iconic Tecton structures built when the zoo opened in 1937. 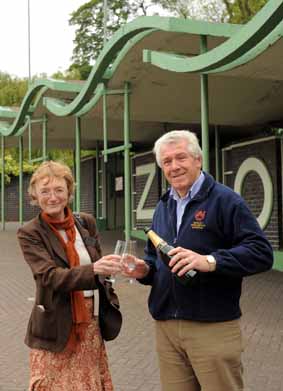 The Heritage Lottery Fund (HLF) has awarded development funding of just over £123,000 for the three year project. The first-round pass means that DZG have up to two years to submit more detailed plans and apply for a full HLF grant of just over £970,000 towards the project.    Home to some of the rarest animals in the world, DZG lies within a conservation area that includes the 11th century Dudley Castle, and attracts more than 200,000 visitors a year.    It also contains the world’s largest single collection of Tecton buildings, named after the renowned Modernist architects chosen to design the Zoo in the 1930s and led by Russian-born Berthold Lubetkin.   The Tecton Group were instrumental in bringing Modernist architecture to the UK, and this complex survives as the only collection of interrelated Tecton designs in Britain and one of few remaining throughout Europe.   The scheme, scheduled to begin in 2012, will see the repair, renovation and new interpretation of four of the Tecton structures  Bear Ravine, Front Entrance, Safari Shop and Kiosk One  plus the refurbishment of the region’s only chairlift which next year celebrates its 54th anniversary. The Tecton structures were designed and constructed between 1935 and 1937 using reinforced concrete – a pioneering system at the time.     The funding will also support a signage and education project for the programme.   DZG Chairman, Cllr David Sparks, OBE, said:?”These buildings are amongst the most significant in the history of Modern Architecture.   “People just do not realise how much today’s world has been shaped by the concepts and techniques pioneered with these buildings in the 1930s.”   Anne Jenkins, Head of the Heritage Lottery Fund for the West Midlands, said:”We’re extremely pleased to give initial support to Dudley Zoo for this fascinating project to restore some of these rare structures.    “Whilst this is just the beginning of the journey, the award of this development money will enable DZG to work up their plans for a full grant in the future.”   Consultations started in 2008 and within a year all 12 of the zoo’s Modernist structures had received World Monuments Fund status and placed on a watch list alongside Machu Picchu and the Taj Mahal, ensuring a global focus on the world’s largest single collection of Tecton buildings.    Peter Suddock, Chief Executive of DZG, said: “This is fantastic news. It’s been a long journey and we have worked very closely with Heritage Lottery Fund, the World Monuments Fund, English Heritage and 20th Century Society throughout.    “At the moment we are preparing final details, and subject to the necessary approvals, phase one will start with the chairlift refurb next spring.”   Jon Wright, Senior Caseworker for The Twentieth Century Society said:?”Dudley Zoo’s significance to the history of modern architecture in the UK cannot be underestimate

Previous: From Singapore to DZG!
Next: Picnic for princesses